Bilaspur is the most important financial center of Chhattisgarh state. Besides, it is administrative headquarter of Bilaspur District, which happens to be the largest and also the most industrialized district of Chhattisgarh state. With so much riding on this city alone, it can be very well summed up that this city is heart and soul of Chhattisgarh. To put it in other words, today much of Chhattisgarh’s political and economic fortunate’s revolves around fortunes of this city. Below is comprehensive and exhaustive information about this immensely important city, right from history to business & economy to important public utility services available in the city. 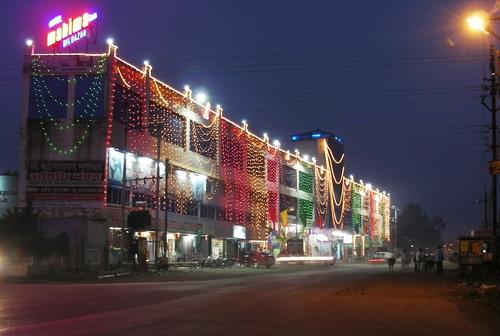 Historical records and documents suggest that Bilaspur was once part of the powerful Kalachuri Empire, who ruled over large parts of Madhya Pradesh and Rajasthan between 10th to 12th century. In fact during all throughout ancient period and even large parts of medieval period Bilaspur was an unknown city for the rest of the world. It came into prominence during 18th century under Maratha rule. It was Bhosale family of Nagpur, one of the rival factions within Maratha kingdom, who got control over this city. Marathas very well understood the geopolitical importance of this relatively unknown city and so did other rival kingdoms. Hence by the turn of 18th century Bilaspur had began to assume unprecedented importance. But despite this fact Marathas could not hold on to Bilaspur for very long time, as they succumbed to resurgent British Empire. For More Click Here

Bilaspur city is located on the bank of famous Arpa River, which is one of the important rivers of Chhattisgarh state. It is one of the main sources for irrigation and drinking water in the region. As far as natural resources are concerned, Bilaspur takes immense pride over its huge reservoir of soils and minerals. Alluvial soil is found in huge abundance here, which has helped this region to become one of the highest producers of paddy crop in the country. As for minerals are concerned, then Bilaspur city and many of its adjoining towns are home to huge reservoir of Bauxite, Limestone, Coal and Dolomite. For More Click Here

Business and Economy in Bilaspur

Owing to huge reservoir of coal today Bilaspur has become hub of power generation in the entire country. In fact one of the largest power plants of India – owned and managed by NTPC LTD – is located just few kilometers away from Bilaspur city. Speaking more about Bilaspur’s burgeoning industrial sector, most of its industries and factories are operating in many industrial areas located on the outskirts of the city. These industrial areas are Silpahri Industrial Center, Sirgitti Industrial Center and Tifra Industrial Center. Most of the industries operating here are small and medium scale enterprises. Polythene bags, sheets, footwear, soft drinks and chemicals are some of the primary products produced by these enterprises. Finally, Bilaspur’s achievement in rice production is mandatory when speaking about its business and economic profile. Because today Bilaspur is one of the highest producers of rice in the country – a fact that has already been mentioned in the above paragraph. For More Click Here

If Bilaspur is the financial hub of Chhattisgarh state, then it is also hub of healthcare in Chhattisgarh. This is because not only Bilaspur has large number of hospitals but also has the most advanced hospital in all of Chhattisgarh. Besides, in all of Bilaspur boosts highest number of clinics, doctors, chemist shops and even medical colleges. With this city boosting such critical health infrastructure in such huge number, its healthcare services can only be said to be immensely robust and efficient. Talking about Bilaspur’s advanced hospitals, their medical infrastructure is completely in par with international health standards. This is why every year they successfully perform complicated surgeries. In fact today huge percentage of operated patients hail from outside Chhattisgarh state. Names of some of these prominent hospitals are Apollo Hospital, Chhattisgarh Institute of Medical Sciences, Shriram Care Hospital and Kims Super Speciality Hospital and Care N Cure Hospital. For More Click Here

Today people of Bilaspur can take immense pride in the fact that their home city is bestowed with all the modern transport infrastructure. Whether it is roadway, railway or local transportation. Bilaspur has in place pretty robust transportation in all the critical areas. Speaking about its local transportation first, it is jointly taken care by auto rickshaws and city bus service. Besides, cycle rickshaw is another immensely important local transportation in Bilaspur. In Bilaspur auto rickshaws and cycle rickshaws are much older transportations than city bus service. More about City bus service, they as of today covers only four routes and number of buses running on these routes is also far less than required demand. Bilaspur Railway Station is the one of the most important junctions of Chhattisgarh state and is therefore one of the critical lifelines for commuters of Chhattisgarh. Daily 300 trains – including good trains – halt here. Hence not surprisingly it is the busiest station of Chhattisgarh state and fourth busiest in all of Central India.

Bilaspur at a glance