The second-largest city of Chhattisgarh , Bilaspur is located about 111 km north of Raipur. This beautiful city is set on the banks of rain-fed Arpa River . The mineral rich region of Bilaspur with distinct geographical location counts amongst the most productive region of the state. Bilaspur city which is administrative headquarters of Bilaspur district is surrounded by Koria District in North, Mungeli District in West, Balauda Bazar-Bhata Para District in South, Shahdol District of Madhya Pradesh & Janjgir-Champa District in East. 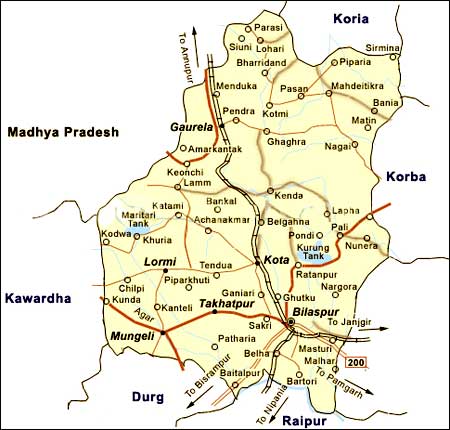 Bilaspur is located at 21º47' and 23º8' North latitudes and 81º14' and 83º15' East latitudes.The north side of this beautiful region is surrounded by profuse green forests and to the east side of the region near Hasdeo valley you will see coal mines. The location of Bilaspur is unique. It has several other districts on its surroundings and it comes under the “Korba Mineral Region”.

Bilaspur is known for its aromatic Doobraj rice and is often referred to as "Dhaan Ka Katora" (bowl of rice). The region is one of the top producers of paddy. Alluvium soil from Arpa River is mainly responsible for making the region productive and fertile. The alluvial soil in Bilaspur is very good for cultivation of rice crop in Bilaspur. Other than alluvium various other types of soils are found in the nearby areas of Bilaspur. If you go to the north side of the region you will find Cuddapah limestone which is also on the south.

Bilaspur is located 260 meters above sea level. The climate of Bilaspur district is sub-tropical, semi arid, continental and monsoon type. Normally it experiences pleasant, mild winter and hot summer. During winters average temperature goes down to 10-20°C.The summers are very hot and humid with average temperature of 23-36°C.During summer the hottest month is May when the heat rises to 43°C.Annual rainfall of the district is about 58 cm.During the middle of June Bilaspur faces the heaviest rainfall of the year which is about 66% of total rainfall here. For the huge amount of rainfall this time if called as “Burst of monsoon”.The climate is ideal for agriculture development, particularly for rice,wheat, sugarcane and cotton crops.

Bilaspur is a rich in minerals . Bilaspur located in “Korba Mineral Region”is famous for its dolomite and coal reserves. Apart from these two you can also find bauxite and limestone extraction factories in the region. Various coal extraction factories are situated in different neighboring areas of Bilaspur which creates lots of jobs for the people of the region .